He may not be charged for the beating – turns out being a cretinous abomination isn’t a crime.

A teenage boy allegedly broke into an Albuquerque mortuary and beat up a female corpse being kept there. Dominic Goodmoney, 17, was arrested Sunday night near Reflections Funeral & Life Celebrations. He was covered in blood, digging into his own cuts and banging his head against a building, according to police.

Now for the best part… His MySpace photo! Read the complete f-ed up story here. 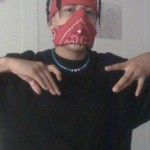