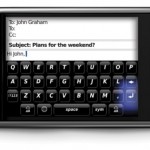 It’s almost that time of year for me. It’s almost time to get a new cellphone! Wooo! Since touch-screen cellphones are taking over the market, I’m considering getting something that sports a touch-sensitive surface. However, since the iPhone is not one of my choices (I’m not switching to AT&T), I’ve been looking at alternatives and sadly there isn’t anything remotely considered an alternative, until now.

RIM is about to release the BlackBerry Storm in November 2008. This will be the first touch-screen cellphone for the company. Currently, I’m with Sprint but I think I might switch over to Verizon for various reasons, and this is almost making the decision a little easier. I’m not going to get into the technical bits or specifications because Engadget and the official site can do it better, but all I’m going to say is that it looks great.

Check out a few sites I picked out below to see how it works and get more familiar with the device. Phone Scoop has a great hands-on with plenty of pictures. Engadget has a bunch of video’s on how the device works.